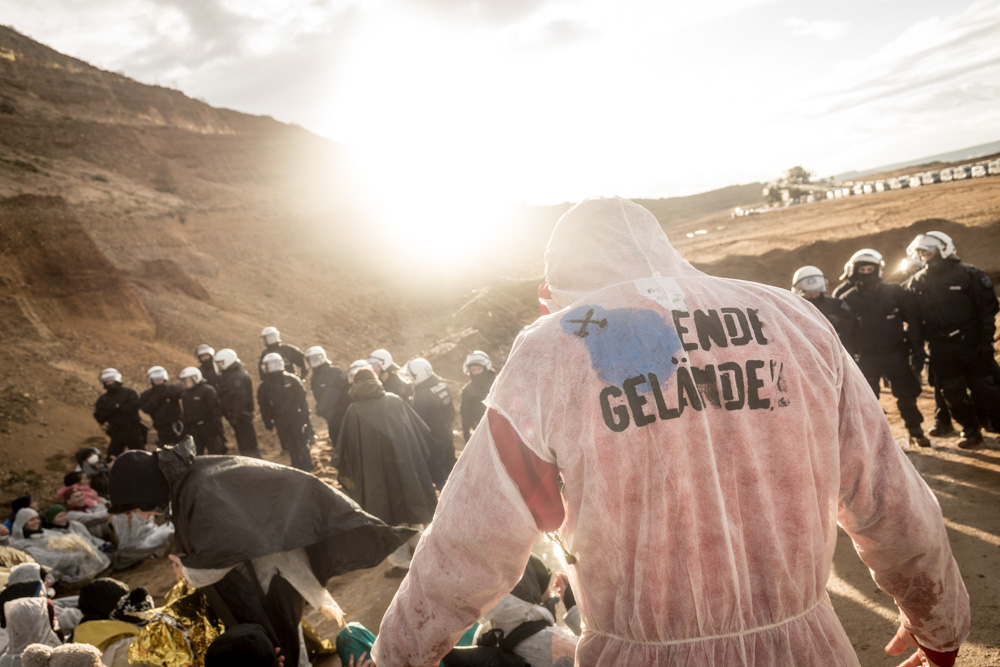 In December 2017, William J. Ripple et al published the paper “World Scientists’ Warning to Humanity: A Second Notice“1 in the renowned Journal BioScience. With 15.364 signatories of scientists all over the world it is the most co-signed and publicly supported paper ever in scientific history. It’s a follow-up to the warning written by the worlds’ most acknowledged scientists in 1992 and gives an overview of the current condition of our planet and the trajectories of human impacts since then. The words of the authors are very clear: “Especially troubling is the current trajectory of potentially catastrophic climate change due to rising GHGs from burning fossil fuels […], deforestation […], and agricultural production – particularly from farming ruminants for meat consumption […]. Moreover, we have unleashed a mass extinction event, the sixth in roughly 540 million years, wherein many current life forms could be annihilated or at least committed to extinction by the end of this century. […] lay citizens must insist that their governments take immediate action as a moral imperative to current and future generations of human and other life.”

On page two of the paper you find the following graphs. The rate of change they describe is for most parameters since 1960 out of all proportions regarding a healthy balanced global ecosystem. Especially depressing is the fact that since the 1960s we lost 60% of vertebrate species on the planet (panel f). If this trajectory continuous, being optimistic, more than 90% would be gone by the end of the century – if not earlier. 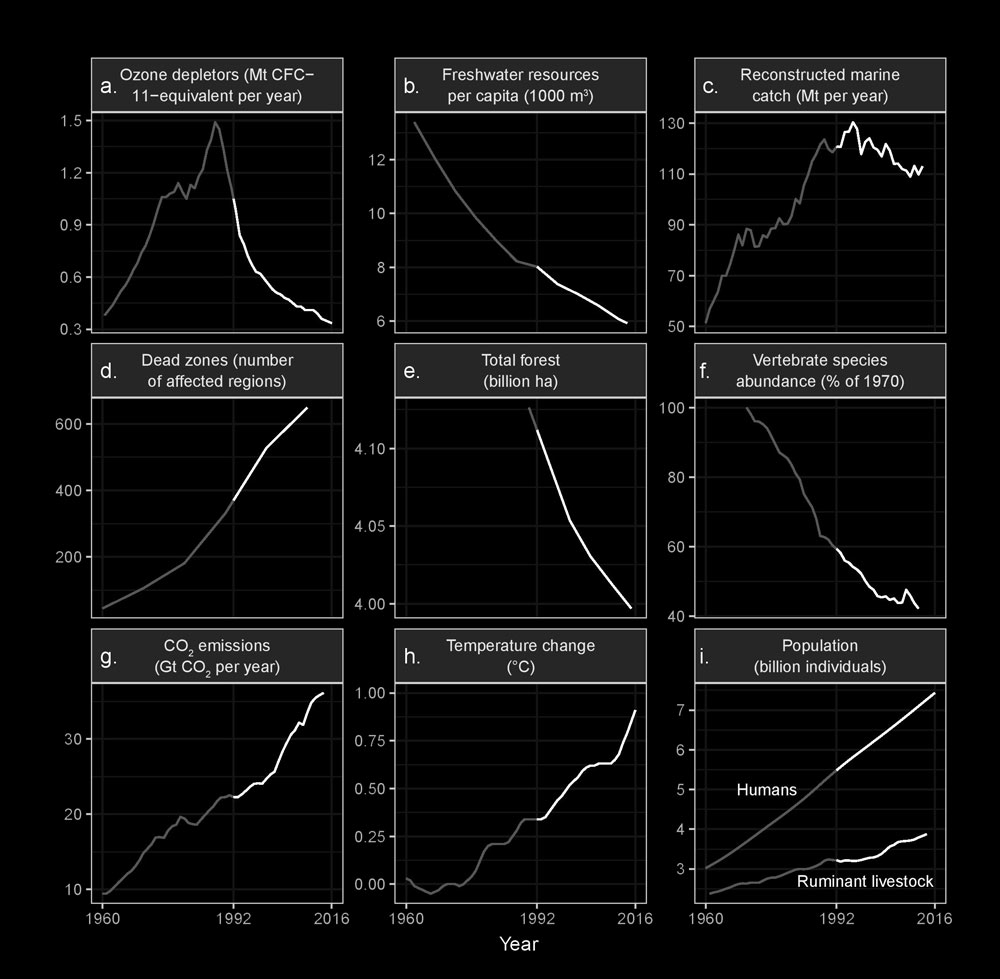 Why are we not looking at the major issue of our time with the attention it deserves, although it is already causing serious problems all over the planet (e.g. mass-migration, economical instability, resource wars, poverty, mass extinction of species etc.)? How is it that people are wondering about drought, low water levels, increasing extreme weather patterns and destruction, catastrophic wild-fires, diminishing harvests etc. and are hardly talking about the climate catastrophe and their own greenhouse gas emissions, let alone the fact that the lifestyle and economic ideology of the modern western civilization turns out to be the major driver of the pollution? How is it that we are causing the sixth mass-extinction event in earths’ history although – as animals gifted with “reason” – we could have known better? Why are we so miserably failing to confront ourselves with scientific facts and do the “right” thing politically?

For one reason, there seems to be a misunderstanding in public about established scientific facts, namely that these are subjects one may have an opinion about. E.g. the underlying physics of climate change (dynamics of electromagnetic radiation) is something you get to understand within the first two semesters of undergraduate studies in physics – “The science is clear”, as James Hansen from NASA is repeating over and over. You can’t negotiate with nature. The laws of physics will unfold no matter which political stance you take, which opinion you have about them or whether you like them or not. Nature doesn’t care about us. We ourselves have to consciously take care about our environment.

In autumn 2017 I grouped up with activists in the Rhineland Lignite Coal Mining Region in Germany. It was a rich experience in how people can actually make a difference in light of the worldwide incompetent corrupted political powers, which since decades are not willing to fully adhere to the scientific facts.

The project of Ende Gelände (www.ende-gelaende.org) has already a year-long history in the fight against coal. Every year activists gather in thousands and block coal-infrastructure in German pits. On Sunday 5th November 2017, right before the offical begin of the 23rd Climate Conference in Bonn, 4500 activists from “Ende Gelände” entered and occupied the nearby lignite coal mine. It’s the largest coal mine in Europe and the associated powerplants are among the biggest singular CO2 emitters on the continent.

As in recent years – the action was incredibly well organized and strategically planned to be such an outstanding success. The media echo was enormous and so “Ende Gelände” again managed to point its fingers right onto the huge shortcomings of current climate policies and systemic cooperate power. Germany is celebrated as a country of the green energy revolution while burning lignite coal (in terms of green-house gases and pollution the worst fossil fuel existing), is since decades and nowadays a vital part of the countries’ energy mix – about 23% as of 2016. Together with 17% black coal, about 40% of electricity are produced via coal power plants. In absolute terms Germany is European Champion in burning coal (75 million tons in 2016).

Fossil fuels have to be phased out, there is no question about that. Since international governance is failing since decades to accomplish this via binding policies, it’s a healthy sign that civil resistance and disobedience against governmental corruption and corporate power is increasing. It’s a direct action in accordance with the calls of science as quoted in the referenced paper above. We are long since overdue to take these warnings as seriously as they are meant to be. 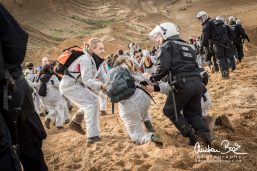 After entering the lignite coal pit through a steep mining road, the squad (or “finger”, in the terminology of “Ende Gelände”) got split in two groups and locked in by the police forces. The german power-cooperation RWE, which is operating the pit, has dug deep trenches into the way the day before the action. So it was very hard for the activists to be fast enough as climbing through the loose sand was severely slowing them down. Circumnavigation was also difficult if not impossible since the road was created along a steep abyss.

Being locked in this place for hours, the elevated position though gave epic views over the mine and the digger while the other fingers were entering the field from the east. The huge machinery in the background created an alien, nearly science-fictionish atmosphere while the police, the workers, fences and countless trucks/pick-ups of RWE were aligning in front of it to prevent the masses of people occupying the digger.

In the evening the squad settled an agreement with the police forces that they would be accompanied out of the pit without anybody being physically evicted, registered or her/his ID taken. The other fingers in the pit though had some more serious troubles. The police was using horses against the demonstrators. One activist got severely injured after being pushed by a policeman and overtrampled by a horse. Several people where hurt by pepper-spray and initially a couple of dozens have been also arrested. As it goes though with actions of “Ende Gelände”, due to the great (legal) organization in the background, the peaceful consensus of passive resistance and the strong public support from the outside – nobody got into serious troubles. The most common accusation concerns trespassing. In the worst case people get to sign a paper where they commit not to enter property of the RWE power corporation any more in their life-time – with serious consequences if they are caught doing so. There might be other single, more severe cases – of the police accusing people having actively resisted eviction for example – but in general the public pressure (also by the media) is usually too high to create more serious consequences for peaceful activists. There is a trend though in new government policies that fines concerning resisting police forces, even passively, may be much more substantial now.

All over though, “Ende Gelände” brings an inspiring notion to the people: that they are not just merely helpless individuals against the massive, partly irrational forces of modern economics, but that one could actually counter them – in a very concrete, physical sense. Even if that means breaking minor civil laws like trespassing. Compared to the scientific projections of our future and the current condition of our planet, this seems like a minor violation of societal order. Actions like this would be unnecessary if our political leaders weren’t failing to address the issue and put into binding laws what science is demanding since decades. Of course “Ende Gelände” itself is not creating any direct economic harm to the power-companies. These are billion dollar corporations. And the magnitude and time of interference is far too small. But in times where the success of a business is largely defined by its image and marketing, actions like this create impacts by raising public awareness via medial response. As one of the leading scientists associated with climatology – Susan Solomon – is pointing out at her talk at Arizona State University2: The most important thing is to spread the word about it, since the problem is much more fundamental than any individual could handle. It’s a global economical political challenge, and every country, actually every living being on the planet is involved.

On 4th November 2017, 25.000 people demonstrate in Bonn against coal energy and for climate justice, right before the start of the 23rd Climate Conference and the simultaneous actions of civil disobedience from “Ende Gelände”. Bonn is situated only 50km away from the lignite coal pit. The demonstration was filled with people of all kinds of ages, backgrounds, ethnic groups and societies from all over the world. Its variety is an expression of the fact the climate catastrophe concerns everybody on the planet. 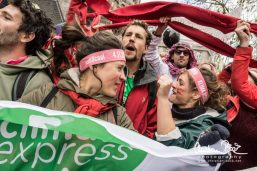 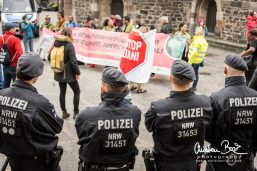 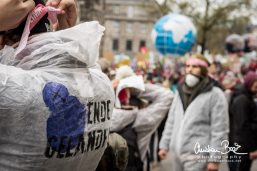 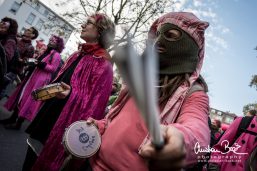 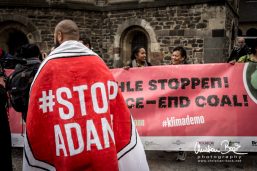 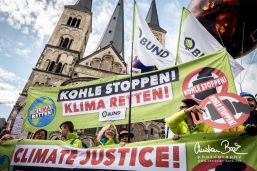 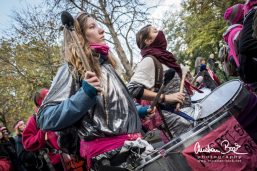 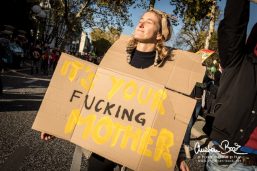 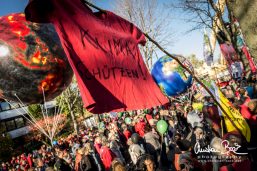 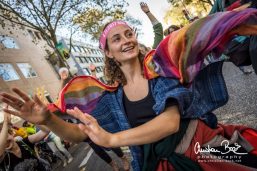 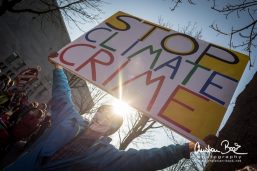 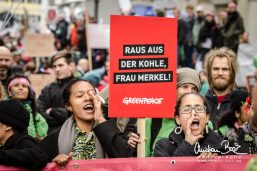